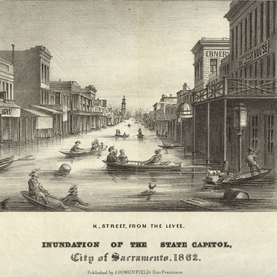 In 1861, starting from Christmas Eve, there were several continuous severe storms in California.  It rained for 43 days.  You could call it biblical scale.  The result was mega flooding in the Bay Area and Central Valley.  The heavy rain quickly transformed rivers running down from the Sierra Nevada mountains into raging torrents that swept away entire communities and mining settlements. The rivers and rains poured into the Central Valley, turning it into an inland sea 300 miles long and 20 miles wide. Thousands of people died and 200,000 cattle drowned.  Sacramento was submerged under 10 feet of brown water filled with debris.  California’s legislature was unable to function.  It had to move to San Francisco until Sacramento dried out six months later.  By then, the state was bankrupt.

If such event occurs today, it would be catastrophic for USA.  Unlike 200 years ago, the Central Valley is now home to more than six million people, 1.4 million of them in Sacramento. The land produces about $20 billion in crops annually.  Portions of the land have dropped 30 feet in elevation because of extensive groundwater pumping, making those areas even more prone to flooding.  Scientists who recently modeled a smaller event that lasted only 23 days concluded that this smaller visitation would cause $400 billion in property damage and agricultural losses. Thousands of people could die unprepared.  Central Valley is a major food supply site.  Such loss could seriously affect the food supply of the entire world.

So scientists started to investigate the cause of such event and the likelihood that it would occur again.  The result is very alarming.  Scientific American reported this in an article in the January 2013 issue.  You may wish to read the online version for details.

Geologic evidence of sediment in that area and in coastal region along the west coast of North America shows that truly massive floods occurred in California about every 200 years.  Layers of deposit revealed that extensive flooding of a mega scale occurred in AD1100, 1400 and 1650, preceding the 1861 incident.  A pattern was established thus hinting that the mega flooding events were not incidental.  There must an underlying cause for their recurrence.  A theory was proposed that such floods were most likely caused by atmospheric rivers: narrow bands of water vapor about a mile above the ocean that extend for thousands of miles.  Much smaller forms of these rivers regularly hit California, as well as the western coasts of other continents. 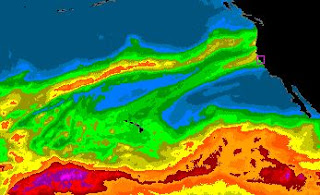 Atmospheric rivers were discovered relatively recently by serendipity.  In 1998, National Oceanic and Atmospheric Administration NOAA conducted a research on storms and found some were the result of jets: streams of high altitude humid wind.  Also in 1998, MIT researchers doing computer simulation of global wind and vapour pattern found that water vapour from the tropic were transported to high latitudes from east to west in just several narrow bands.  At about the same time, satellites with the new Special Sensor Microwave Imager for the first time observed images of water vapour distribution globally.   It showed concentration of water vapour appearing as tentacles from the tropic to cooler region formed and dispersed on time scales from days to a couple of weeks.  The three findings collaborated on the theory.

In perfect conditions which on average could appear at intervals of several hundred years, an especially strong jet of water vapour, or atmospheric river, could reach coastal areas and be blocked by mountain ranges, thus causing heavy and continuous precipitation.  Just imagine the Mississippi River is vaporized.  The volume of water expanded several hundred times, now a mile deep, a hundred miles wide, and extended several thousand miles into the Pacific Ocean; it then empties itself over Sacramento.

Based on this mechanism, it is estimated that atmospheric rivers could form over large body of water in the tropic.  The west coast of all continents are under threat.  For the North America west coast, layers of sediment being evidence of serious flooding were found from North Mexico up to British Columbia.  England and Spain suffered from serious flooding recently, which were also the result of such phenomenon in the Atlantic Ocean on a smaller scale.  Western Australia also experienced the same attack.

The researchers duly raised a warning that the California government should get prepared, set up warning system and emergency response procedures for flooding of mega magnitude, same as those for hurricane and earthquake.  As a normal gesture in any research nowadays, they added the perspective of global warming.  Owing to the warming of the earth in the last one hundred years, the energy and moisture in the atmosphere have increased a lot compared with that 200 years ago.  Statistically, California is now due for another mega flooding.  This time it would be much more severe in magnitude.  The damage would also be much greater owing to the increase in human activities and production in the area.  If we are looking forward to the end of the world, this may be a rehearsal.