I read an interesting news article on BBC lately. It showed how the very faithful would go any direction to make contact with god. It was a project in the Netherlands called God’s Hotline. If you are interested in the story, you may wish to read the full article.

A Dutch artist set up the project and designated a mobile phone number as the telephone number of God. People could call this number, but they would have to leave a message. It was part of an art installation in the town of Groningen. The telephone would first play a voice mail message which said: “This is the voice of God, I am not able to speak to you at the moment, but please leave a message.” Within a week, there were 1,000 messages left on the answer machine.

The artist claimed that the focus of the project was on changes to the ways Dutch people perceived religion, although some critics said the project would mock those with religious belief. The artists said that the content of the messages would remain confidential and would not form part of the art project. But who knows, now that the voice recordings were permanent records.

Such Call God behaviour is not new. There was another articles in the archive which was equally interesting. It was about a phenomenon arising from the movie Bruce Almighty, starring Jim Carrey. 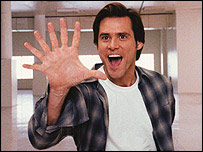 Jim Carrey was a man chosen by God to be Him for a few days. Morgan Freeman was God. The movie exposed many misconceptions on religion. In proving to Jim Carrey, God would guess how many fingers Jim was hiding behind. Of course God was right every time. At last, God said “Seven fingers”, and Jim gladly showed his hand to prove God wrong, only to find that he really had seven fingers.

The moral of this scene to me was that God was always right, even when he was wrong he could make it right. There was no real truth in him because he could make anything false true. True and false are relative. When there is no falseness, there is no truth.

Normally, phone numbers used in movies were non-existent so as not to flash a real number on the screen, but this time it was not. The victim was now considering taking legal action against the movie company….. of nuisance being God.