The end of the world just passed.  It shows how ridiculous religions are.  We are all certain that the end of the world will come one day.  It does not mean the end of everything, just mankind.  Over a long period of 13 billion years since the universe began, primitive men only appeared 200 thousand years ago, and modern men just 20 thousand years ago.  Any species could only last for a while and mankind would extinct eventually for whatever reason.  This natural phenomenon turns bad when the end of the world is played out as scare tactic for a intended cause.  This is what religions are doing, be it the evil cults, scams, or supposedly formal religions.  They all boiled down to a notion of god who can save us from this.

So when Albert Einstein said God does not throw dice, and when he admired the grandeur of the universe, religious people welcomed him as a believer.  Notwithstanding he subsequently admitted to Niels Bohr that he was wrong on god not throwing dice, religions did not let him go and continued to promote Einstein the great mind as a believer of god.

The nail in the coffin was a letter written by Einstein to Gutkind, who sent him a book for comment.  The letter was written in 1954, a year before his death.  In the letter, Einstein stated his concept about god and settled once and for all what he really believed.  This letter is well known to the world, and the original manuscript is now a treasure.

The recent turn of event is that the original manuscript is put up for auction again.  The original is the letter handwritten by Einstein in German on Princeton University letterhead, complete with the envelop and stamp.  It was first auctioned in London in 2008.  In October this year, it went on auction again at eBay, with a pre-qualifying price of US$ 3 million.  It could be the catch of the day of a private collector, and we may not have a chance to see the original.  But eBay put up a high resolution image of the letter which we could see as a consolation.  You may like to read a detailed report of the event here. 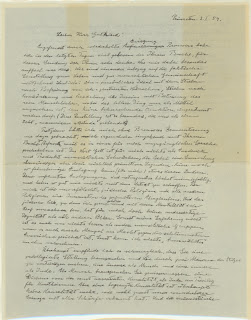 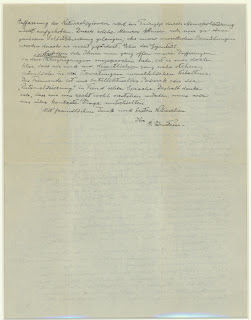 It is not the original manuscript that matters, but the god view expressed by Einstein.   Below is an English translation of the passage which is very worth reading:

“… I read a great deal in the last days of your book, and thank you very much for sending it to me. What especially struck me about it was this. With regard to the factual attitude to life and to the human community we have a great deal in common.

… The word God is for me nothing more than the expression and product of human weaknesses, the Bible a collection of honorable, but still primitive legends which are nevertheless pretty childish. No interpretation no matter how subtle can (for me) change this. These subtilised interpretations are highly manifold according to their nature and have almost nothing to do with the original text. For me the Jewish religion like all other religions is an incarnation of the most childish superstitions. And the Jewish people to whom I gladly belong and with whose mentality I have a deep affinity have no different quality for me than all other people. As far as my experience goes, they are also no better than other human groups, although they are protected from the worst cancers by a lack of power. Otherwise I cannot see anything ‘chosen’ about them.

In general I find it painful that you claim a privileged position and try to defend it by two walls of pride, an external one as a man and an internal one as a Jew. As a man you claim, so to speak, a dispensation from causality otherwise accepted, as a Jew the privilege of monotheism. But a limited causality is no longer a causality at all, as our wonderful Spinoza recognized with all incision, probably as the first one. And the animistic interpretations of the religions of nature are in principle not annulled by monopolization. With such walls we can only attain a certain self-deception, but our moral efforts are not furthered by them. On the contrary.

Now that I have quite openly stated our differences in intellectual convictions it is still clear to me that we are quite close to each other in essential things, i.e; in our evaluations of human behavior. What separates us are only intellectual ‘props’ and ‘rationalization’ in Freud’s language. Therefore I think that we would understand each other quite well if we talked about concrete things.

With friendly thanks and best wishes,
Yours,
A. Einstein”