Germany is quite religious.  Or put it in another way, she uses religion cleverly for her own causes.  Those who read European history would know that after the Roman Catholic fell in power, Germany, or her equivalent sovereignty states several centuries ago, took over the void.  To reap the residual faith, she created the Holy Roman Empire, putting the Pope as a front, while Germany as the emperor of Europe.

During the Reformation in the 16th century, Germany lent great support to the Protestants, and became a Protestant country.  If you know a little music history, you may notice that many great composers such as Bach, Beethoven were Protestants.  Nowadays, the numbers of Protestants and Catholic in Germany are about the same. 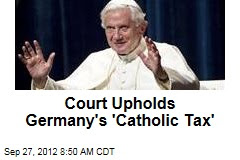 With religion as the governance of the country, her income became de facto state income, or taxation.  In the past, people were not asked to donate at will to the church, nor were they persuaded to give 10% of their income to the church.  They were just taxed.  Money would go to the state, thus the church as well.  Today, such laws are still valid in Germany.  People are still taxed on their faith, with 5 billion euros given to the Roman Catholic church, and 4.3 billion euros to the Protestant churches each year.

Now comes the problem.  Under the present democratic Germany governance, people could opt out that they do not belong to any church and thus are exempted from the church tax. When it comes down to the acid test of faith and money, we see the true human nature.  The Reuters published an article in September 2012 on such problem.  There has been an exodus of the faithful to quit their church and thus avoid the church tax.

The annual total of church leavers, usually around 120,000, rocketed to 181,193 two years ago as revelations about decades of sexual abuse of children by priests shamed the hierarchy and prompted an apology from German-born Pope Benedict.

Here is an added interesting point.  While people quit the church to avoid the church tax, some remain faithful and continue to enjoy church services.  To some of them, quitting the church is only an administrative procedure concerning taxation.  They still go to the church for sacraments on marriage and death. 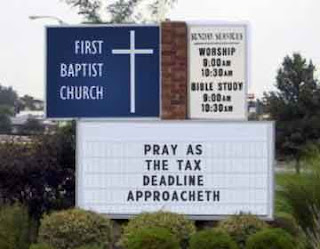 However, the church is not that forgiving.  She would not tolerate people coming to the church to be saved as a free lunch.  If you want to be saved, then you have to pay.  This line of thinking is seriously against the spirit of any religion.  However, with the approval of the Vatican, the German Catholic Church recently decreed that people who opt out of the church tax should not be given sacraments and religious burials. Furthermore, they cannot work in the church or its institutions, including schools, hospitals, charity groups or choirs.  I wonder if this is against Hong Kong legislation on discrimination.  Also, I think this goes against the purpose of missionary where the goal is to get more people to the church instead of rejecting the faithful when they do not pay up.