Your car may leak your personal data

This is a planned scenario revealed in the IFA 2012 Consumer Electronic Show in Berlin.  You may see the full article in IT World.  In a joint panel presented by Ford, Microsoft, Inrix and Tuneln Radio, the future of car electronic devices were revealed.

It started with road safety.  Cars will broadcast information on its GPS location, speed, size, etc through a wi-fi system to nearby cars.  Such car-to-car communication will activate safety device which can control the cars making sure they are not on dangerous collision course.  A pilot project has been launched in Ann Arbor where 2800 cars of various types were such connected.  If the result is proven to be successful in reducing road accidents, it will likely be made mandatory by legislation. 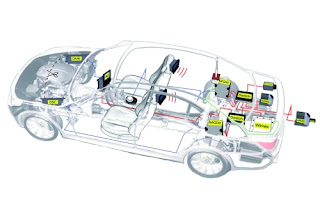 Other manufacturers are quick to seize the chance to gain market.  The communication with cars is expanding.  The identity of the car, including licence number and ownership which are public information will also be included in the communication.  Coupled with a smartphone which the driver plugged in when seated, the car will know the preference of the driver on the setting of the car such as seat position, rear mirror position and seat belt.  Knowing your identity, the car will tune your favourite radio station, play your music, read your calendar, know your appointments, plan the route you take, calculate the time you take and how fast you should drive to be on time.  Ford is working on sensors built into the seats to monitor your heart rate and awareness.  The insurance companies are inclined to include these features as mandatory because of their potential to reduce claims.

What happen to all these valuable data?  Besides yourselves and the car, there are many other parties who may have a ligitimate claim of access.  They include many service providers, insurance companies and law enforcing agencies.  Of course there are also hackers spying on the air waves for information broadcast by cars.  Some food for thought: in USA, Police made more than 1.3 million requests for car location data last year alone, roughly two thirds of them in non-emergency situations.  At present, there is no way to stop companies from using such data for their own purposes or sell them en masse.

Questions are being asked whether we will gain the legal right to control how our car data is used.  This may need some new legislation which the mobile service companies will firmly object to.