Confessions of an Economic Hit Man

Confessions of an Economic Hit Man
By John Perkins 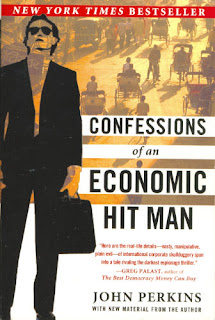 The author said this book is his biography;  that is, a true story.  I find it more like a novel.  It was written vividly with many interesting details.  The underlying story is the conspiracy of the USA Government using false economic tools to influence other countries.  Quite interestingly, the USA Government did not openly rebut this book.  Instead, some critics claimed that the book does not have substantial details on the intention of the government, and that it is rather a personal interpretation of the USA foreign aid policy.  Actually, facts of truth cannot be denied, but intention can be.

John Perkins was trained by the National Security Agency NSA to be an economic hit man, both in concept, intention and skills.  Thereafter, he was employed by an international consulting firm.  As an employee of a private firm, he was not paid by the USA Government, nor had any official connection with her.

The scheme worked this way.  First, the USA Government showed a friendly gesture to a developing country, giving hope of assistance on modernization and progress.  With the introduction of the diplomats, the private firm would be awarded a consultancy on the feasibility of infrastructures such as hydroelectricity, power grid, highway system, etc.  The economic hit man would provide professional input, concluding that such infrastructure would greatly increase the gross national product.

With such economic forecast, USA banks, the World Bank and USA foreign aid agencies would grant enormous loans to the country.  Using insider knowledge, all infrastructure projects would be awarded to USA companies.  In a decade, the country would be deep in debt but the infrastructure would not be able to generate sufficient wealth for the repayment.  On the verge of default, the creditors would ask for exclusive right on the exploring of natural resources by USA firms.  The deal would usually let the firms retain 75% of the profit, with another 20% given to the ruling families as sweetener, leaving only 5% for the national coffer.  In the meantime, the debts were still outstanding.  With such outstanding liability and the grateful ruling class, the USA Government would have favourable votes from these countries on UN affairs and other international affairs.

But what about those countries which could repay the debts?  A typical example is Saudi Arabia with ample crude oil export.  The economic hit man designed the Great Money Laundering Project.  A few decades ago, Saudi Arabia was a desert with only nomad population.  With the assistance of the economic hit man, the entire infrastructure of the country was modernized, from garbage collection, highway system, energy system, communication system, and in particular, to a military system with state-of-the-art USA weaponry.  All infrastructure projects and supplies were handled by USA firms.  All loans from USA were channeled back to the USA economy in this way.  But Saudi Arabia still had to repay the loan from her oil reserve.  The kill in the whole event was that all management, maintenance and supplies of all infrastructure and weaponry were continuously undertaken by USA firms because Saudi Arabia had no skilled personnel for them.  The end result is that Saudi Arabia now relies heavily on USA in running her infrastructure and in being a strong military power in the Middle East.  She is now a strong ally of USA and is a strong military base for the USA force in the region.

The economic hit man was not always successful.  There were countries with leaders who were full of national pride and were aware of  the USA intention.  The economic hit man is only one level of many covert operations.  When they failed, the real hit men would come into play.  Uncooprative leaders were outright assasinated.  This happened several times in South America where presidents were killed in air crashes, including Roldos of Ecuador and Torrijos of Panama.  For those well protected leaders, the USA Government would find an excuse to rage war.  There are typical examples in Panama and Iraq.

Economics is an inexact science.  There are much narrative fallacy within and it can be easily manipulated one way or the other.  While there have always been debates on Keynesian economics and Friedman economics, the economic hit man could easily take the best of both worlds in meeting his own needs.  Heavy investment on infrastructure is the core of Keynesian economics.  This is favourably labeled as a prerequisite on the road to prosperity.  However, when it comes to carrying out the projects, the Friedman economics of a free market is heavily promoted, leading to open competition by private firms, with USA firms having great advantages using insider information.

The final trick is to give false creditability to this theory.  John Perkins took the statistics theory developed by Andrey Markov in the beginning of the 20th century, which is a decision making process based on probability.  He employed a mathethetician and launched a research project based on the Markov Process.  In six months, they produced the Markov method for econometric modeling, the result is the forecast of the impact of infrastructure investment on economic development.  Technical papers were produced and were published in science journals.  The tool of the economic hit man now has a false academic foundation.

The work of John Perkins as an economic hit man covered Indonesia, Panama, Saudi Arabia, Iran and Ecuador.  All of them were victims of USA foreign policy.  John Perkins found his conscience and resigned from the consulting firm in 1980.