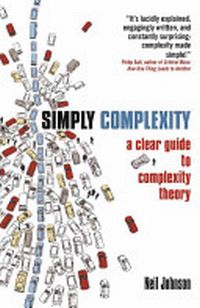 This is a book about the new science The Complexity Theory.  This new branch of science was a further development of the Chaos Theory, but the emphasis has changed from examining the self emergence of order from chaos to complex systems which follow some mathematical models in explaining many emergent orders.  The book is not very academic and it uses some everyday examples such as traffic jams, financial market crashes, wars and cancer growth to demonstrate such systems.

A simple definition of the Complexity Science is the study of the phenomena which emerge from a collection of interacting objects, such as a crowd of people.  For a more detailed definition, some characteristics for such a system were identified.

First, there should be a population of multiple interacting agents which typically forms a network. These agents may be very simple, but  not necessarily so. Second, there is competition or cooperation among the agents for limited resources.  Third, there must be feedback processes which give the system memory and history. With these characteristics, the agents are able to adapt their strategies, and the system able to interact with its environment.

A complex system is able to self-organize without the need of a central controller, and there is emergence of non-trivial patterns of behavior, including a complicated mixture of ordered and disordered behavior.

The author gives many examples of complex systems, and a jazz band is among the most interesting of these examples, where many musicians interact with each others’ playing and adjust their own intuitively, leading to the emergence of a spontaneous new performance every time.  From the models he developed, It was found that within a complex system, the population of agents will often become polarized into two opposing groups. This tends to reduce fluctuations in the behavior of the system. It is sometimes possible to steer the behavior of a system by manipulating a subset of the agents.  The system is reinforced by networking and its connectivity.  Such models successfully demonstrate the movement of stock markets, from a disordered market with bids and offers cancelling each other, to sudden order leading to sharp rise or fall owing to small disturbances.  Traffic conditions resulting from the complex interaction of individual drivers, and tumour growth from the complex interaction of malignant cells are the areas of research.  It is hopeful that the research results may give insight to more accurate prediction of the behaviour of complex systems.

I try to link the group of Executive Officers to a complex system.  There are over 2,000 officers in the grade and they are linked by information networks with frequent input and feedback. There is a global network organized by the grade management, but officers are also linked by many informal networks, some are global and some are regional grouped by departments or past colleagues.  Sometimes this system displays disorder when officers are going ahead with their own chores randomly. But sometimes owing to some triggering information in the network, the system can display some orders, or coordinated actions such as targeted discussion on a topical subject, or even industrial action.  Such order may be discouraged through an inefficient centralized information system.  But in a complex system, agents will find a way, or the shortest route, of information distribution.