At time of hardship, civil service pension is always seen as the fat of the potbelly ready to be trimmed. This is particular felt as people now live longer and pensioners receive pension for a longer period, costing the government more. The pension calculation based on final salary is also a point of contention. The UK government is now proposing a reform of the civil service pension. Please see the BBC news below. The main change is not to link pension to final salary but to average salary throughout the career. In order to sell to staff, the total amount of pension in general must be comparable to the present scheme, but the retirement age will be delayed to 67. The new schemes would be applicable to the serving officers on current pension schemes.

We experienced reform of civil service pension in Hong Kong before. The New Pension Scheme of 1987 lured many colleagues into joining because of the 100% increase of the commuted pension. The cost is the increase of pension factor so that one would need to work longer to get the same pension. Also, statutory retirement age was delayed to 60. Then came the 2000 reform where pension was abolished for new recruits. All new comers have to join the Civil Service Provident Fund Scheme which was said to provide a larger sum at the time of retirement. However, part of the amount was based on investment return which was not guaranteed. In fact, performance of the investment of the scheme proved to be worse than expected in the last few years.

As the demographic leans towards the aged worldwide, the burden of the aged is being looked at more seriously. Almost everywhere there is proposal on the delaying of retirement and a critical look on pension payment. If the UK government is successful in the reform, the Hong Kong Government may take it as a good guide. There are still many serving officers who are entitled to pension. Possible actions could be the adjustment of the statutory retirement age, and possibly the pension calculation. There could also be temptation to modify the pension adjustment mechanism as the UK Government did. Let’s hope the Basic Law can protect us from these changes. 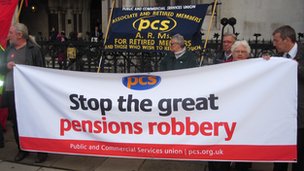 The design of huge, new, pension schemes for more than five million staff in the public sector is starting to emerge. Following the recommendations earlier this year of Lord Hutton’s independent report into the future of public sector pensions, the government is negotiating with public service trade unions. One of Lord Hutton’s big ideas was that all staff in the public sector should be moved out of their current pension schemes. That would apply to staff in the NHS, local government, civil service, schools, and the various “uniformed” services: the armed forces, fire brigades and Police.

They will be offered instead membership of so-called career average schemes, from 2015. Until now, it has not been clear exactly how the government intended to design these new pension arrangements. They can vary in detail very considerably, and the detail can make a big difference to how much they cost to fund, and how generous or meagre they are for employees.

The BBC has learned all the main details, which means we can now assess how these schemes might compare to those currently in place. The main features are these:

The higher pension contributions now being asked of public sector staff in their mainly final-salary pensions – averaging an extra 3.2% of their salaries over the next three years – will carry over to the new schemes. Contributions will be less for lower earners. The standard ‘accrual rate’ will be 1/65th. On a salary of £20,000 this gives a pension of £308 a year for each year worked. This is less than the 1/60th accrual rate in place for most final-salary schemes currently, which gives a pension of £333 for each year worked. However, working longer could mean a bigger pension at retirement. The revaluation of pension entitlement each year during accrual will be in line with a measure of average earnings, to protect pensions from inflation as they are being built up. That will mean better pensions for many workers, particularly women, and means the perception that all staff will necessarily receive smaller pensions is wrong.

The normal pension age will rise in line with the state pension age (SPA), which will increase from 65 to 66 by 2020, and to 67 by 2027 as life expectancy increases. Pensions in payment will be inflation-proofed, rising in line with the consumer prices index (CPI). Benefits under the current schemes were previously linked to the Retail Prices Index (RPI) but with effect from April 2011 they changed to using CPI. This change is currently being challenged in the courts by trade unions.

From the government’s point of view, the proposals are designed to address the rising cost of pensioners living much longer and the perceived unfairness of the current final-salary pension system. Some staff will be better off in a career average scheme, argues John Wright. The government wants to maintain the amount that workers receive in retirement (especially for lower earners) but preserve guaranteed, salary-linked benefits that are increasingly rare in the private sector. The reforms will affect only future pension entitlements for existing scheme members from 2015……
**********