Centre of All Things

I came across this video “The Centre of all Things” made by Seth Andrews as an homage to Carl Sagan’s “Pale Blue Dot”.  This video explores humankind’s place in the cosmos.

It is natural that all living things perceive the environment around them from the first person perspective.  Humankind did so in the same way and we considered that we were the centre of everything.  This extended to the notion that the world was created for us; we were the chosen people.  In the long history of evolution, only in the last few hundred years had we been enlightened by knowledge that we are not the centre of all things.  We now realize how insignificant we are in the cosmos.

You may find the voice-over of this video very familiar and touching.  The narrator is Harvey Gold who is the star narrator of many famous documentaries made by Discovery Channel and the National Geographic, etc.  It is so good that I transcribed the text.  It is now appended below. 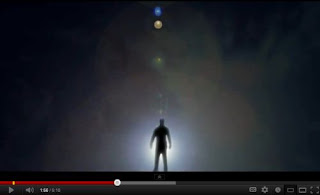 Imagine what it was like for those who came before us, at the dawn of humankind,
When the earth was flat, when the moon and sun were our mother and father,
and when the stars were just pinholes on the curtain of the sky;
When we drew our history with primitive pictures,
When we fashioned our shelter inside the cold rock of the landscape,
When the long life was thirty years,
When everything we saw was a sign.

A flash from the sky meant god was angry.
When the earth shook, the spirits were displeased.
The flood waters came, and we begged for forgiveness.
When the volcano erupted, and we appeased it with sacrifices.
We suffered from sickness and disease, and we called it a curse.
When love ones perished, and we called it judgment.
Everything was beyond our understanding, mysterious, strange, wondrous, terrifying,
Unknown.
Somehow we believed that we were the centre of all things.

And then, we began to see our world with new eyes.
The moon was a place we would one day visit, and leave our footprints in the dust.
The sun was a brilliant cascade of helium, hydrogen;
A star, single, solitary star among billions of stars, Inside a single galaxy,
Alongside hundred and billions of other galaxies,
of a universe born billions of years before us.
The tempest above us, the fire beneath us,
They became explainable, measurable and often foreseeable.
Our crude illustrations gave way to rich expression of pictures and verses
that ignited our imagination.
We build our shelter from wood, mortar, glass and steel.
We discovered living world beyond the naked eyes,
And we inhabited that world to understand, and begin to conquer sickness and disease.
We began to unlock the code of our very being,
And discovered the bond we shared with all living things.
We celebrated long lives of over a hundred years.

Our age is the new age of enlightenment
At this very moment, humankind is beginning to grow beyond the childish figure of its infancy,
To refuse to be satisfied with unanswered questions,
To acknowledge the universe much grandiose,
And more wonderful than the superstition of our ancestors would ever allow.
To understand that even though we occupy a tiny planet inside a vast universe, we are still part of it.
We re growing.  We are learning.  We are achieving.
We are evolving.
We finally understand that we are not the centre of all things.